Snapshots provide a method for you to create a point in time copy of an instance or volume, in order for you to rapidly revert the state of your resource to that point in time. In some cases you may be applying changes to an instance that may not be successful, and creating a snapshot before allows you to revert any changes you made to the OS or software installed in the instance.

They can also be used to investigate the state of a powered-off instance or any other storage attached to that instance in a safe manner; by making a copy that you can attach to another machine for analysis or investigation.

Snapshots are not backups. They are stored on the same storage platform as your original volumes, making them unsuitable for disaster recovery needs. They are not the same as snapshots as may be named in other cloud platforms. They should not be used to create volumes for new machines.

Snapshots can be created from any block storage volume, however if a volume is currently attached to an instance when a snapshot is created, the snapshot does not interact with the operating system or software installed in the instance in order to ensure the volume is not being written to at the time the snapshot is taken.

Therefore, while you can create a snapshot from a running instance, the snapshot is at best “crash consistent”. That is, your snapshot will restore an instance to roughly the same state as if the instance was turned off uncleanly. This may complicate reverting a snapshot depending on the activity in the instance at the time the snapshot was taken. You also have to consider the operating system or software installed and how these will react with your snapshot being taken while the instance is running.

To avoid inconsistencies between a snapshot and a running instance, it is a common approach to stop applications from running, or to run commands that will quieten the activity in the instance, before taking your snapshot .

Creating a snapshot is easy from either the dashboard, command-line client, or using API calls.

Creating snapshots from the dashboard¶

From the volumes page on the dashboard, select “Create Snapshot” from the drop-down menu on the volume you want a snapshot created for. 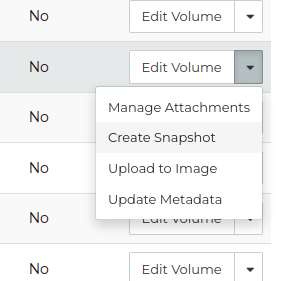 For volumes which are not currently attached to any instance, you will be prompted for a name and description for the snapshot. 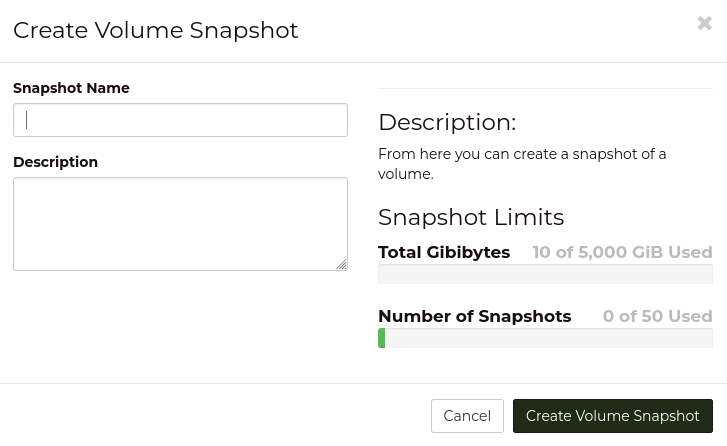 However, for volumes that are currently attached to an instance (even if that instance is shutdown or shelved), you will be warned that a snapshot created under these conditions may be corrupted. 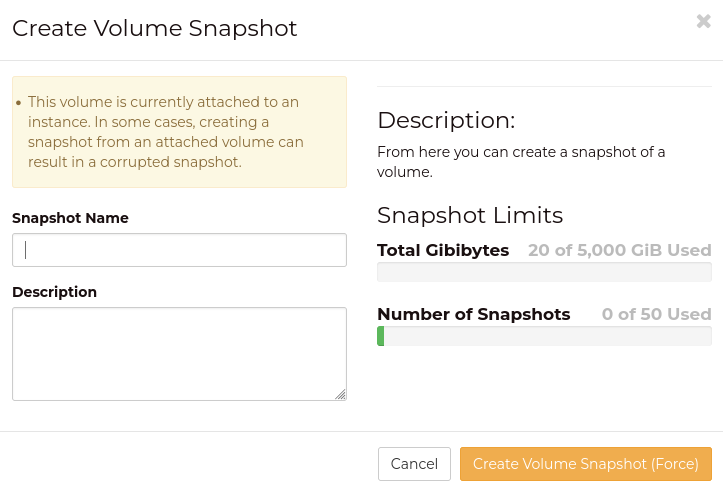 As noted above, snapshots of attached volumes may not be reliable to revert from. You may need to perform steps before taking a snapshot, such as stopping applications running inside the instance.

Creating snapshots from the command-line¶

You must have sourced an openrc file before you can use any of the following methods to create a snapshot.

The following command will create a snapshot of a volume that is not current attached.

This may return an error saying that the volume is attached. For attached volumes, the --force flag needs to be added:

Creating a volume from a snapshot¶

You can create a new volume from a snapshot using the dashboard, command-line, or API calls. Once created, you can attach this to an existing instance.

A volume created from a snapshot has a hard dependency on the snapshot. This means you cannot delete a snapshot until all volumes created from it have also been deleted.

Instead, you should create an image of the volume and use that image to create any new instances you require.

Once you navigate to the “Snapshot” page under the “Volumes” heading on the side bar, you will be presented with a list of your current snapshots. The drop-down menu on a snapshot has the “Create Volume” action, which will prompt you to provide details of the new volume: 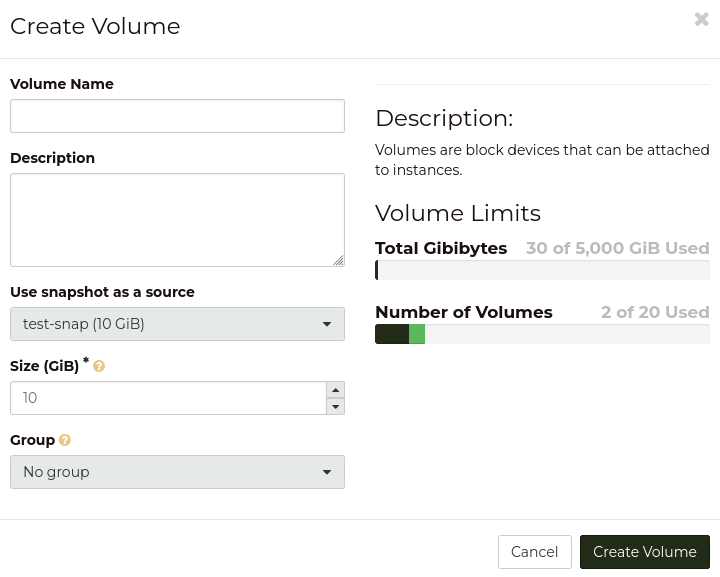 This will then create the new volume using the snapshot.

You must have sourced an openrc file before you can use any of the following methods to create a volume from a snapshot.

The following command will create a volume using a snapshot with the default volume type: