A root disk is used to boot the compute instance and typically contains an operating system image.

When creating a new instance via the dashboard you are asked to select a Boot Source. You can choose to use an image provided by Catalyst Cloud, images uploaded by you, instance snapshots, existing volumes, or volume snapshots:

Compute instances can have their root disk backed by a Persistent Volume or an Ephemeral Disk. The table below outlines the main differences between these two options:

By default the web dashboard will create a Persistent Volume. This is the recommended option for most use cases, and in doubt, the one that should be selected.

For convenience, it is possible to request the compute service to delete the Persistent Volume used for the root disk when the compute instance is deleted. To do so, select “Yes” for “Delete Volume on Instance Delete”.

For production workloads it is not recommended to delete volumes automatically when compute instances are deleted.

Launching an instance from an NVMe volume¶

In order to launch an instance from an NVMe volume we need to create a volume of the right type based on the image that we need to run. Once this is done we can launch a new instance from that volume. 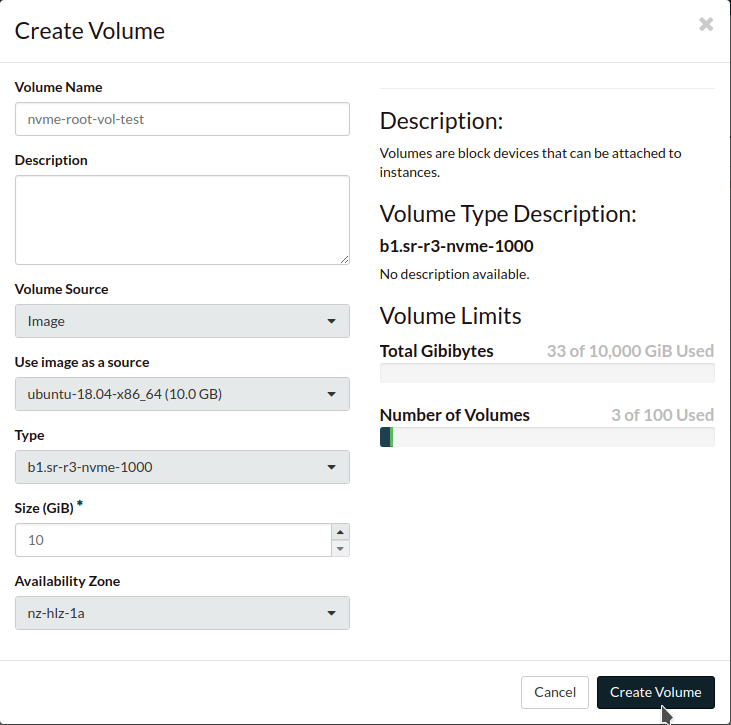 Once the volume has been successfully created we can launch the instance.

Go to the Instances page and select Launch Instance. Populate the Details section as required.

On the Source page set Select Boot Source to Volume, you should now be able to see the volume you created in the previous step under Available. 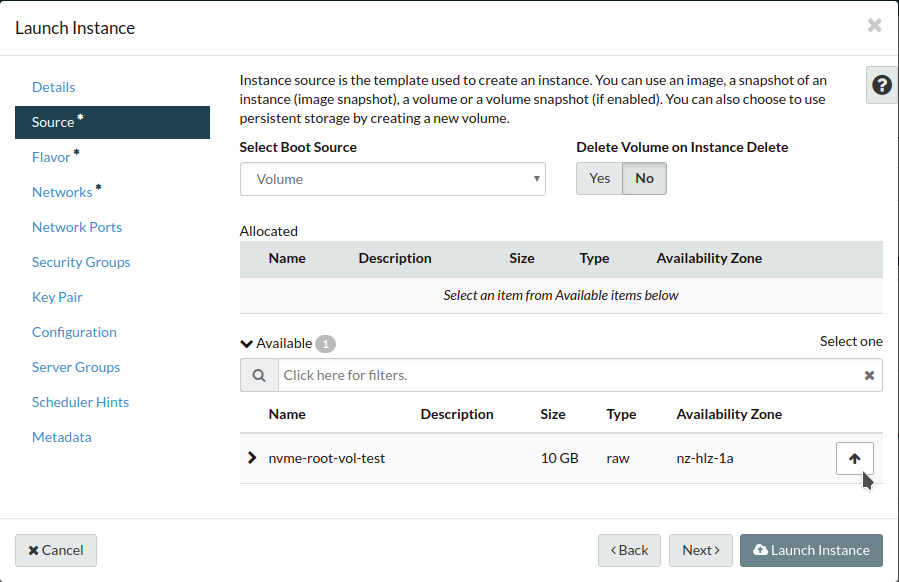 Select your volume and ensure it now appears under Allocated like this. 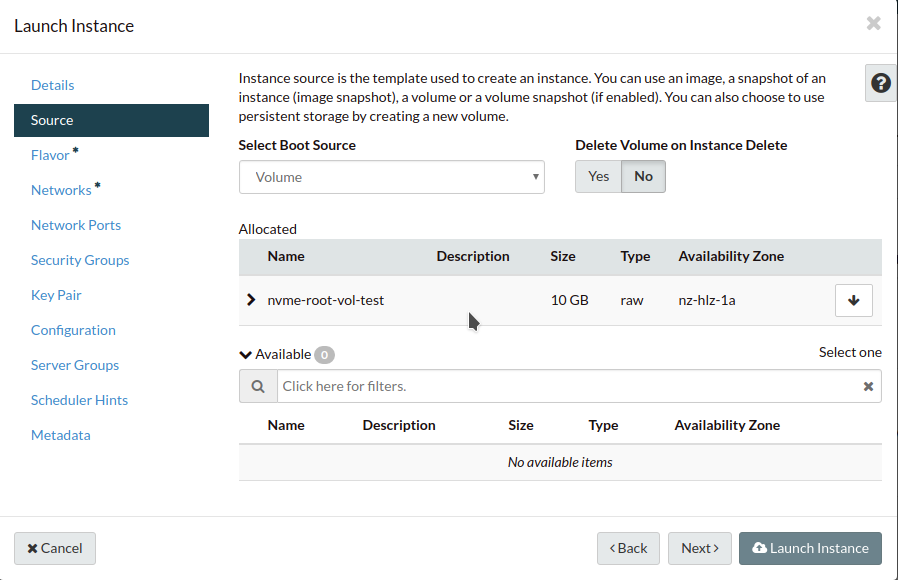 Complete the rest of the Launch Instance dialogue as required and launch the instance.

The compute instance flavor (US spelling is correct here) defines the amount of CPU and RAM allocated to your virtual servers. The price per hour for a compute instance varies according to its flavor. Existing flavors can be found here: https://catalystcloud.nz/services/iaas/compute/

Our flavors are named after the amount of CPU and RAM they provide you, so you don’t need to consult our documentation to find out their specifications. We currently provide a number of common combinations of CPU and RAM, and are prepared to introduce new flavors if required.

A virtual CPU (vCPU), also known as a virtual processor, is a time slice of a physical processing unit assigned to a compute instance or virtual machine. The mapping of virtual CPUs to physical cores is part of the performance and capacity management services performed by the Catalyst Cloud on your behalf. We aim to deliver the performance required by applications, and to increase cost efficiency to our customers by optimising hardware utilisation.

Since virtual CPUs do not map one-to-one to physical cores, some performance variation may occur over time. This variation tends to be small, and can be mitigated by scaling applications horizontally on multiple compute instances in an anti-affinity group. We monitor the performance of our physical servers and have the ability to move compute instances around, without downtime, to spread out load if required.

A script called cloud-init is included in all images provided by the Catalyst Cloud. This script is there to assist you with instance configuration at boot time. It communicates with the meta-data agent of our cloud and, for example, configures the network of your compute instance as defined by you via our APIs.

Cloud-init is very powerful. It’s a de facto multi-distribution and multi-cloud way of handling the early initialisation of a cloud instance.

When you launch a compute instance on the Catalyst Cloud, you can pass initialisation configuration to cloud-init via “user-data” (either using the --user-data parameter of openstack server create, or as a post-creation customisation script via the web dashboard).

In the following sections, we provide examples that illustrate how to perform common initialisation tasks with cloud-init, using different configuration formats.

The cloud config format is the simplest way to accomplish initialisation tasks using the cloud-config syntax. The example below illustrates how to upgrade all packages on the first boot.

The example below shows cloud-init being used to change various configuration options during boot time, such as the hostname, locale and timezone.

Cloud init can be used to run scripts written in any language (bash, python, ruby, perl, …) at boot time. Scripts must begin with #!.

The mime multi part archive format allows you to combine multiple cloud-init formats, files and scripts into a single file.

The example below uses the cloud-config format to install apache and the script format to overwrite the index.html file of the default website:

Some of the content types supported by the MIME format include:

For other formats and more detailed information on how to use cloud-init to initialise your compute instances, please refer to the cloud-init official documentation.